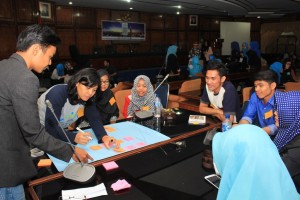 Medan, Indonesia, 23 February 2016 – Around 70 young people gathered in Medan, Indonesia on Saturday for a focus group discussion and survey research on urban youth and equity in Asia-Pacific. The lively event kicked off with presentations from experts and representatives from local communities who shared their views, analysis and experience in tackling youth inequity in its different dimensions in the city. The participants later broke into ten groups in the afternoon to share their experiences on economic, political, social, and cultural inequities, and ended the day by declaring their plans and hopes of changing Medan for the better.

Medan is a city of two million people and has a diverse heritage. Located on Sumatra Island, it is Indonesia’s largest city outside of the densely populated Java Island. “With its history of people from abroad and all around the Indonesian archipelago coming here and learning to live in harmony, Medan could be a model for multiculturalism,” said Kevin Aditya, UN-Habitat national researcher and facilitator of the workshop. “But there is still a gap, not between people of various ethnicities but between citizens and their government,” he added. Ahmad Azhar, a young local resident, said, “I was worried and thought I had to keep doing something after 70% of citizens did not participate in the last mayoral election.” He now volunteers to provide information and education for youth political participation. “Our generation’s apathy stems from not knowing. Publishing our activities on social media sparked curiosity about Medan’s many historic buildings, and made our members want to find out more about local history,” emphasized Rizky Nasution, founder of a heritage awareness community called Medan Heritage. The workshop’s participants expressed a desire to go beyond the sense of political impasse and roll up their sleeves to improve Medan for everyone’s sake, taking actions together on concrete issues such as climate change and clean river.

For this workshop, UN-Habitat teamed up with Yayasan Kota Kita (“Our City Foundation”), Indonesia Youth Meetings Movement (IYMM) and many local youth-led organizations including Turun Tangan Medan. The outcomes will inform UN-Habitat’s Global State of Urban Youth Report 2015/2016, and build a step for young city activists, to continue open dialogues with local authority, civil society and other local partners about how to overcome inequalities in the city. The need for such a dialogue was clear since UN-Habitat’s Medan workshop received hundreds of sign-ups even before it started.

Medan is the first of 7-9 cities and sub-city districts in Cambodia, Indonesia, Mongolia, Nepal and Papua New Guinea that will see national reports contribute to the Global State of Urban Youth Report 2015/2016 (GSUYR 2015/2016).

UN-Habitat’s GSUYR report series analyzes key trends affecting young people in an urbanizing world in relation to the major structural factors and seeks to identify the root causes of inequalities in selected cities and countries. The current research will gather the views of young citizens themselves, and the resulting national, regional and global report(s) will offer up-to-date and contextualized analysis of local and regional patterns as well as the efforts at combating urban youth inequalities. GSUYR 2015/2016 report is expected to launch later this year.

There will be more opportunities for young people in Asia-Pacific to participate in this ongoing conversation surrounding youth development and equitable cities. UN-Habitat’s Indonesia research team plans to hold the next focus group discussion workshop in Yogyakarta, in Central Java, and interested youth in Indonesia can find information from this page. This will be followed by 7-9 other cities. Youth from all over Asia-Pacific are also invited to take an online survey in English or in Bahasa.