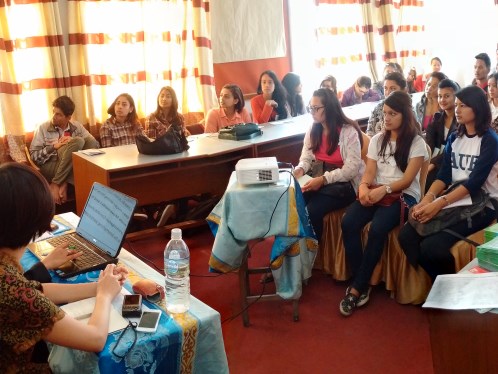 Kathmandu 3 May 2016 – In the week of 24 April 2016, Nepal marked an important moment. It was the first anniversary of the great earthquake. To turn the page with forward-looking consultations, UN-Habitat hosted two urban youth discussions on the critical questions of “equity and youth development” in Kathmandu. A wide range of youth groups supported UN-Habitat to put together the two workshops. The result was an impressive output from youth participants.

UN-Habitat will publish the results as part of the Global State of Urban Youth Report 2015/16 later this year. Young people were at the frontlines of relief work in the wake of the quake in 2015. They applied volunteerism and skills to do many post-disaster tasks, like distributing aid materials, building temporary shelters, and creating open-source maps of the affected areas. The images and videos of such youth volunteers flooded local and global media reports on Nepal Earthquake. In other words, the youth proved that they were resilient in post-disaster Nepal.

The week kicked off with over 50 young Kathmandu citizens debating youth’s role in Nepal Earthquake reconstruction at a special session hosted by UN-Habitat, during the 2nd Asia-Pacific Peace and Development Service Alliance (APPDSA) South Asia meeting, a joint initiative by Global Peace Foundation and UN ESCAP, 23-24 April 2016. Local youths aged 18-24 expressed frank opinions about the ongoing reconstruction process, and the related employment and social issues. Among other issues, participants argued that reconstruction needed to provide more jobs and skills development for local youths. If actively engaged, Kathmandu’s young population had much to offer. “We the youth are opportunity creators, not [opportunity] seekers,” one youth presenter concluded.

The closing remarks brought attention to the opportunity provided by the SDG’s for the youth. Representing UN Youth Advisory Panel, Ms. Neiru Karky stated, “We need to own the concept of sustainable development goals,” recommending to look at urbanization as part of innovation where youths can make greater contributions to the society. Mr. Sudarshan Kunwar, AIESEC Nepal President, expressed an open invitation to participating youths saying “you can align your products, your services in terms of SDG’s” for more impact.

During the week, UN-Habitat also presented the recently published Switched On: Youth at the Heart of Sustainable Development in Asia and the Pacific to Nepal Ministry of Youth and Sports.