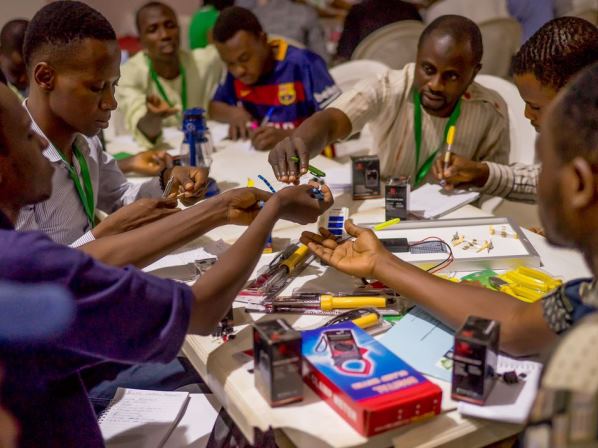 Abuja, 12 January 2017 – The United Nations Human Settlements Programme (UN-Habitat), in partnership with the Federal Government of Nigeria, conducted hands-on training in energy efficiency and renewable energy technologies, green entrepreneurship and enterprise development for 125 selected youths drawn from 26 States across the Nigeria in Abuja in December.

The training, organised in collaboration with the Office of the Senior Special Assistant to the Nigeria President on Sustainable Development Goals (OSSAP-SDGS), targeted unemployed youths in Nigeria. Initial groups of 125 youth participants were selected from across the 26 States of Nigeria and the Federal Capital Territory, Abuja, to benefit from the programme.

The training focused on empowering young entrepreneurs to start income generating enterprises in the renewable energy sector, become active proponents of energy efficiency and renewable energy approaches with a clear understanding of the issues and application around climate change, act as positive agents in their communities and bring about behavioral change among their peers and across their communities.

The Minister of Youths and Sports, Solomon Dalung in his opening remarks thanked the SSAP and UN-Habitat for organizing the training programme. The Minister stated that the importance of the energy industry in Nigeria cannot be overemphasized. He also stated that the present administration is committed towards the development and empowerment of Nigerian youths.

He assured participants that the Federal Government of Nigeria would continue to take their interests into consideration in the formulation and implementation of its policies and programmes. He advised them not to give room for dis-unity among them or allow themselves to be manipulated or used as criminal elements by Politicians. He also charged them to work hard to succeed and use the opportunity of the training to establish themselves and build solid relationships with one another.

Mr Dalung also announced that the government is in the process of putting in place a trust fund for youths to address issues of funding.
The Senior Special Assistant to the Nigerian President on Sustainable Development Goals, Adejoke Adefulire, said the programme was developed by the Presidency in partnership with UN-Habitat to empower youths through the provision of training in energy efficiency and renewable technologies. She said, “The main objective of this programme is to involve Nigerian youths in the green economy project, contributing to climate change mitigation, because majority of our youths do not have stable economic opportunities, as they are unemployed, discouraged or vulnerably e

Adefulire observed that the training was not to replace the university or college degrees of the trainees but would enhance their capacities. “By your decision to be part of this exercise, you will move away from poverty, crime, drug abuse, militancy and terrorism to a sustainable platform, as this programme will address goal one of the SDG, which is no poverty, goal seven on renewable energy, and goal 11 on sustainable cities and communities,” she said.

Leaving no one behind

The Habitat Programme Manager for Nigeria, Kabir Yari who represented the Director for Regional Office for Africa, said subsequent training would capture a greater number of trainees, adding that the exercise would go a long way in reducing unemployment in Nigeria.
He said, “Our collaboration with Nigeria on this project is to provide technical inputs in terms of facilitators, technical personnel and other related things that will ensure a successful training. As you know, the SDGs is a 2030 agenda which intends to improve the lives of all citizens and leaving no one behind.” Tapping into its new thinking on producing items that can be locally sourced for the consumption of Nigeria’s population, the federal government is to partners with the United Nation Habitat to train some Nigerian youths on clean energy for home use.

The partnership for empowerment captures capacity building in energy technologie

s for production of clean stoves and lantern that will serve the energy needs of rural poor and other areas where renewable energy will complement power needs.
Explaining the rationale for the partnership for the training, Vincent Kitio, Chief Urban Energy Unit, says the youth are being trained in a blend of entrepreneurship and technologies to developed skill sets in production of renewable energy as alternatives to replace kerosene stoves and lantern which has proven dangerous in some cases.