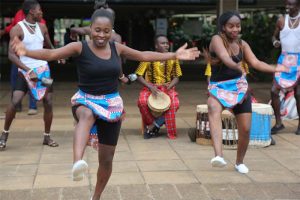 The Friday event was the climax of events held in Kenya to mark the day that celebrates the verve and enthusiasm of the group of people who form more than half of the world’s 7 billion population. Speaker after speaker hailed the commitment of the new generation of youth who are determined to take their destiny into their own hands.

Earlier in the day, UN-Habitat Executive Director Ms. Maimunah Moh’d Sharif kicked off the ceremony by appearing on the ‘AM Live Show’ on one of Kenya’s leading TV stations NTV. Ms. Sharif said her organization was committed to empowering young people of the world in achieving their dreams and aspirations.

“In Nairobi we have a good project where we have a project in Dandora, one of the low income estates, where we have reclaimed a garbage dump and built a public space. We have seen a tremendous change in the fortunes of the young people around the place,” she said in the panel discussion that also included an NGO activist Raphael Obonyo as well as Irene Kendi and Lydiah Mathia both Senior Advisers to the Kenya’s Cabinet Secretary on Public Service Gender and Youth Affairs Prof. Margaret Kobia.

Commenting on the theme of this year’s event, ‘Safe Spaces for Youth’ the Executive Director said UN-Habitat was promoting the use of the popular computer game, Minecraft to help young people across the globe to design the kind of spaces they wanted to live or work in.

The International Youth Day is marked on August 12th every year. However, because the day fell on a Sunday the UN family chose to celebrate it on Friday.

Later at the Gigiri Complex, the acting director general of the United Nations Office at Nairobi (UNON) Mr. Tamret Samuel said the entire UN system starting from the office of the Secretary General was committed to youth empowerment. He said young people played a crucial role in world’s development.

He said that commitment was recently witnessed when the President of the General Assembly convened a meeting on youth that was well attended by government delegations, diplomats and partners. Mr. Samuel said there was an urgent need to harness the full potential of the youth.

In a joint video message UN Secretary-General Antonio Guterres and his Envoy on Youth Jayathma Wickramanayaka said they wanted to help tap into the full potential of young people, a move they said would be beneficial to the United Nations. They said young people needed a voice and that the UN listened to the voice of young people.

A young resident of Nairobi’s Mathare slums, Isaac Mussa ‘Kaka’ took the audience through his life in the slums and the various positive activities they were engaging in including garbage collection and securing public places including football pitches.

At a press conference, Cassia Morales representing Youth Climate Leaders said the fight against the effects of climate change cannot be won if the youth were left behind. “Our organisation works to build spaces for young professionals, entrepreneurs and such like people and we look forward to closer partnerships with the United Nations,” Morales, a Brazilian national said.

Representing the Governor of Meru County, the County Executive for Sports and Youth Affairs Daniel Kiogora said those in authority must come up with laws to empower the youth. “In our County we are dealing with the issue of cheap illicit brews and drug addiction among the young people,” he said.

Ms. Sherif said that Kenya had a huge population of young people and this needed proper planning. Minister Kobia said her government had launched several projects all aimed at bettering the lives of the youth.

The high-level segment was followed by an interactive session in which panelists responding to comments and questions from the floor. The Director of the Youth Congress Mr. Raphael Obonyo who was the moderator defined safe spaces as spaces that create an enabling environment for youth to create opportunities for themselves. He encouraged participants to join the Twitter Challenge by submitting their views on the safe spaces theme on hashtags created for the event – # #SafeSpaces4Youth, #MySafeSpace and #YouthDay.

In his opening remarks Christian Benimana a young architect and Director of the African Design Centre noted that by 2030 over 60 percent of the world population will be under the age of 18 with most of them living in informal settlements. African Design Center estimates that to meet the demands of this growing population an additional 70 000 000 000 housing units, 310 000 schools and 85 000 health facilities will need to be constructed in a safe and sustainable way, ensuring local context, proof of impact, potential upstream investments, and the “beauty of Justice”. ‘A beautifully built environment is a fundamental human right,” he said.

Responding to a question about the role of development partners in creating safe spaces, UN-Habitat Deputy Executive Director Dr. Aisa Kirabo Kacyira emphasized the importance of ensuring that safe spaces are inclusive by creating an enabling environment for participation of all youth, including those in informal settlements and marginalized communities. “As partners we must be able to hold each other accountable at the lowest level. We therefore need to ensure that our policies, systems, programmes and financing models can stand the test of time.,” said Ms. Kacyira. She urged the youth to take advantage of existing platforms such as the World Urban Forum to make the voices of youth part and parcel of the sustainable urbanization process.

Leading participants in repeating the slogan “Nothing for Us Without Us” Ms. Faith Nafula Wafula of the Commonwealth Youth Council noted that safe spaces enable youth who are the largest segment of our population to learn, grow, engage, influence the development process sustainably by ensuring that they are involved at all levels of planning and execution of initiatives that affect them.

Mr. Isaac Muasa of the Mathare Environmental One Stop Youth Centre described the ideal safe spaces as those built by the youth themselves and for which they have a sense of ownership; spaces that give them hope; and spaces that provide opportunities for youth to be gainfully occupied to avoid being drawn into illegal and often dangerous activities.  “Safe spaces should help the youth to avoid dying young,” he said.

“Safe spaces for youth should be easily accessible with no barriers and no hiccups. The spaces should harness youth creativity and innovation, allowing them to make mistakes without serious consequences” said Ms. Chebet Lesan, Founder and CEO of Bright Green Kenya. Youth with different skills and talents should be able to access each other within the safe space and find innovative ways of collaborating to ensure they create income generating opportunities.