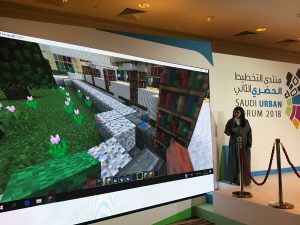 Riyadh, Saudi Arabia 18 October 2018 – Minecraft is an online block by block building game in which players create their own unique world using 1x1m blocks. UN-Habitat facilitators have been helping local school children to set priorities for their communities using Minecraft.

The Future Urban Planners workshop engaged boys and girls aged 10 to 13 years in urban design as part of the Block by Block initiative, a collaboration between game-developer Mojang, Microsoft and UN-Habitat. The workshop was part of the Saudi Urban Forum which bought together local and international engineers, urban planners and designers to outline the vision for Saudi cities in 2030.

The children were given a model of Taibah Market Car Park in Riyadh and asked to redesign it to their liking. For three days the children worked tirelessly on their models. Selected groups then presented their ideas to leading professionals and government representatives at the closing session of the Forum.

All the children wanted greenery, openness and inclusivity in their models.  “We have put wheelchairs for people with disabilities, and lines on the floor for blind people to follow,” said 11- year old Jude. Other children chose to include an archery range, a greenhouse, an aquarium, food trucks, a roller coaster, a trampoline city and an urban farm in their models.

Following interactions between the children and government officials during the final presentations, Forum participants recommended a strong focus on inclusivity and participation. The children’s priorities will be presented to the Ministry of Municipal and Rural Affairs (MOMRA) for inclusion in the planning for Saudi cities.