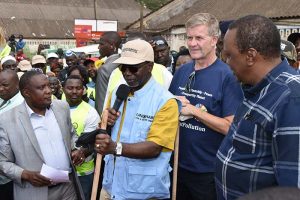 They were joined by officials from the Environment Ministry, county government officials and  private sector companies.

This was the third cleanup in Nairobi which takes place in all 85 wards of the Nairobi County which was spearheaded by local authorities and members of the County Assembly of Nairobi.

President Kenyatta called on residents to take care of the environment

and thanked UN-Habitat and UN-Environment leadership for joining the cleanup. “We can only achieve our goals if we are united,” he said.

on from youth and women groups, the private sector and resident associations among other key players in the city. We hope that all city residents will take it as part of their routine even as we embrace our clean up slogan my waste my responsibility,” said Nairobi County Governor, Mr. Sonko.

On 27 October the will take part in a clean up in the informal settlement of Mathare, Nairobi.