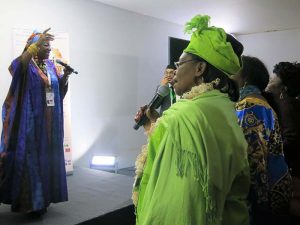 The session on “Planning and programming strategies for transition at the local level” was led by UN-Habitat with support from Cities Alliance. The panellists included the Mayor of Ouagadougou Mr. Armand Beouinde, the Mayor of Chefchaouen (Morocco) Mr. Mohamed Sefiani – and representatives from Durban (South Africa), Cities Alliance, Slum Dweller International, JICA, the International Association of Metropolitan and Territorial Planning Agencies, Kisumu County (Kenya), Tunisia, Cameroon and Togo.

Laura Petrella, who heads City Planning, Extension and Design at UN-Habitat, opened the session asking whether current planning regimes are fit for purpose. She remarked: “there are gaps in the ways that cities have developed and business as usual is not acceptable.”

The subsequent discussion focused on empowering local and sub-national governments to support the move to a sustainable urban Africa. Key recommendations included the need to develop implementation tools such as regulations, special mechanisms for urban management, land banking for urban extensions, and strong local resource mobilisation for implementation of plans.

A session Intermediary Cities, defined as those with between 50.000 and one million residents, emphasized their importance as being home to a fifth of the world´s total population and one third of the total urban population.

The session followed the signing in July by the Government of Morocco, UN-Habitat, United Cities and Local Government (UCLG), and UCLG Africa of a Memorandum of Understanding  for the development of a national strategy for intermediary cities.

The second part of the session, featuring experts from UNESCO Chair of Intermediary Cities, the Organization for Economic Co-operation and Development and Cities Alliance, gave the Government of Morocco the opportunity to present its vision putting intermediary cities at the core of its urban agenda and regional and national development strategies.

A day long session on “Human mobility and migration: challenges and opportunities for local and regional authorities in Africa” discussed “Migration Week” in Marrakesh next month. The day provided an opportunity to address the various challenges in managing migration flows.  UN-Habitat showcased the Mediterranean City 2 City Migration Project, implemented with UCLG and the International Centre for Migration Policy Development, which supports affected cities to ensure migrants are provided with adequate housing and basic services.

UN-Habitat participated in a panel organized by the Sub-Saharan Transport Policy Programme (SSATP), the International Association of Public Transport (UITP) and the Partnership of Low Carbon Transport which highlighted the role of the New Urban Agenda in localizing the Sustainable Development Goals and the complementary and mutually supportive roles of local authorities and national governments in achieving inclusive and sustainable mobility.

UN-Habitat staff also took part in panels on youth and women as well as an evening event on safety in cities hosted by UCLG along with UN-Habitat and the information and communication technology company Huawei.