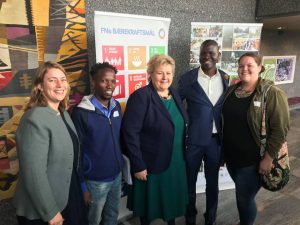 Asker, Norway, 24 October 2018 –  UN-Habitat and Asker Kommune (Norway) co-hosted the third Asker Youth Conference on UN Day, celebrating the engagement of youth in achieving the SDGs through local action. Convened under the theme of “Localization of the SDGs”, 50 youth from the Norwegian communities of Hurum, Røyken and Asker came together with international youth delegates and government leaders to discuss how the three communities could use the SDGs as a framework for sustainability.

Attending from the Government of Norway was Prime Minister Erna Solberg, Minister of Local Government and Modernization, Monica Mæland and the Minister of Education and Integration Jan Tore Sanner, and the current Mayors of Asker, Hurum and Røyken.

“It is inspiring to see so many young people engaging in what happens in their municipality and in their neighbourhoods. You are participating in building our democracy for the future. Today you have the opportunity to give your opinions on what New Asker can be in the future,” stated Minister Maeland, “The cooperation between New Asker and UN-Habitat in order to achieve the SDGs is encouraging and demonstrates that the UN also has impact locally in Norway.”

The goal of the conference was to develop youth informed policies and programmes utilizing the SDGs as a framework for the soon to be constituted New Asker. Young men and women from the three merging municipalities worked with international youth and governance experts from UN-Habitat to create concrete proposals to present to the incoming municipal council .

“The SDGs are important because they reflect our needs – health, education, innovation, inclusive and safe cities and climate change. These are all issues that we must tackle now, “ stated Isaaac Muasa, coordinator of the Mathare One Stop Centre (Kenya) and a recipient of the 2018 UN-Habitat Scroll of Honour, “We cannot wait to start in a year, five years or a decade from now. We cannot leave these goals to collect dust at the international level, we must “localize” them, we must make sure we can take local actions to bring them about.”

The SDG framework for local governments created by Asker is being sought after by municipalties globally, with Mayor Lene Conradi and her staff in high demand to share their new tool. One aspect of the framework is its focus on inclusiveness, which the Asker Conference highlighted.

“The Sustainability Goals will help guide our work and priorities – and develop local solutions for the future – solutions that will also contribute globally,” stated Mayor Conradi. “This means that in 2020 the new municipality – New Asker – will have local goals in our Municipal Masterplan, that are in line with the global goals and targets in the UN Sustainable Development goals.”

Demonstrating the support of young people at the highest level, the Prime Minister attended the conference and the working groups, listening to and engaging the youth in the delberations.

“Hurum, Royken and Asker are leading the way, and we hope that others will follow the same path,” stated the Prime Minister, “Using the 17 goals as a framework for building the New Asker municipality is an excellent strategy. The goals are all about thinking globally and acting locally. I know that there are also delegates from UN-Habitat at the conference. Thank you everyone  for your advice and your take on the goals.”

Norway is undergoing local municipal reform. The goal is to build bigger, stronger local authorities. As part of the reform, Hurum, Røyken and Asker have decided to merge in 2020. The new municipality is to be called New Asker. The three municipalities decided at an early stage that the new municipality should not only be built on ”best practice” but a ”next practice”.

The UN Sustainable Development Goals came into force in January 2016. At the same time, Hurum, Røyken and Asker had just started planning their future merging. It was natural, therefore, for the three municipalities to use the UN’s 17 Sustainable Development Goals as the framework for building the new Asker municipality, The outputs gathered from the conference will be further included in the municipal plan for the new Asker municipality which was created to foster better governance and inclusion of local communities and which will be implemented from 2020.