World’s Youth Gather In Nairobi Ahead Of Blue Economy Conference 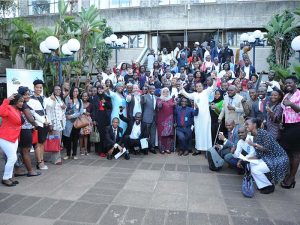 Nairobi, 26 November 2018—Youth from across the globe gathered at the United Nations Office at Gigiri, Nairobi to discuss how to maximise the benefits of the Blue Economy.

The Youth and the Blue Economy conference event was a curtain raiser for the Sustainable Blue Economy Conference  in Nairobi and featured the theme “Enhancing Youth Participation and Access to Opportunities in the Blue Economy”. The Blue Economy refers to the sustainable use of oceans, lakes, rivers, wetlands and other water resources for economic growth, improved livelihoods and job creation.

“When Canada’s Prime Minister Justin Trudea took office he gave himself a second portfolio – Minister of Youth. This speaks loudly to the importance Canada places on youth,” stated Ms. Lisa Stadelbauer, High Commissioner-Designate to Kenya and Permanent Representative to UN Environment and UN-Habitat, “He said that it is vital to give youth the space to have their say and take part in the decisions we make. Youth are not the leaders of tomorrow they are as well leaders of today [and} If we are to be successful in the blue economy then we must start utilizing youth ideas and skills as a positive input for sustainable development.”

commits everyone involved – youth, local and national governments, the private sector and the United Nations – to act on the recommendations with the document, assuring the full inclusion of young men and women in the Blue Economy.

The DeclarACTION recognizes that while 120 million young people reach working age every year, the Blue Economy workforce in many developing countries is ageing. The need for youth to access investment resources and skills development is critical to success of the Blue Economy.

“There are many career opportunities including marine biotechnology, harvesting and processing of sea food, extraction of non-living resources as such as seabed mining, ships engineering, piloting, communications and generation of new resources like energy and fresh water,” stated Ms. Elizabeth Marami, Kenya’s First Female Marine Pilot, who also challenged young people to have an open mind to explore the blue economy.

According to the Kenya Institute for Public Policy Research and Analysis (KIPPRA) report, over half the world’s population lives within three kilometres of a water body, and in the developing world, majority of this population are unemployed young men and women.

“A youthless government, is a useless government,” concluded Linus Sijenyi, Project Coordinator at UN-Habitat, “We must strive to assure youth always have a seat at the table.”