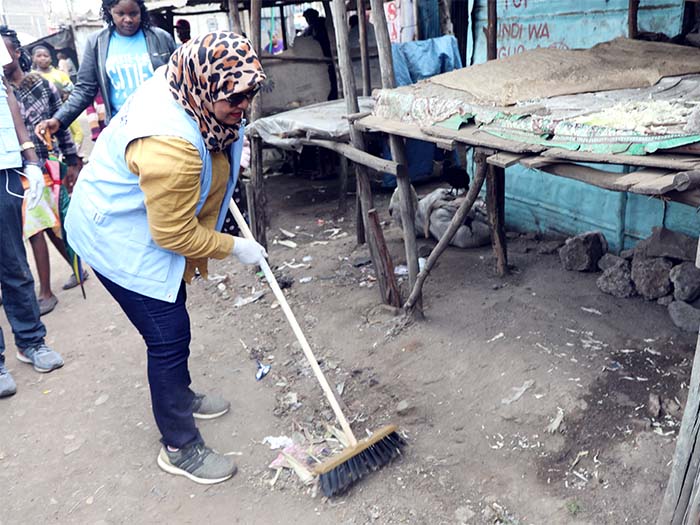 NAIROBI, 3 December 2018 –  A large crowd of residents from one of Kenya’s biggest slums, Mathare, joined UN-Habitat staff members and diplomats for the Nairobi County Government’s monthly clean up.

The volunteers, who included UN-Habitat’s Executive Director Ms. Maimunah Mohd Sharif, walked through one of the main streets in the informal settlement collecting, raking, brushing and digging up some of the huge amount of rubbish on the streets.

Since August, the Country Government has encouraged Nairobi residents in the 85 wards to clean up their environment on the first Saturday of each month under the slogan – My Waste My Responsibility.

UN-Habitat, which has its headquarters in Nairobi, has supported the clean up campaign with the Deputy Executive Director taking part in a clean up of a market in October with President Uhuru Kenyatta and the Executive Director participating in Mombasa in September. On World Habitat Day on 1 October UN-Habitat launched its municipal solid waste management initiative called Waste Wise Cities which encourages all cities to commit to a cleaner environment.

“We are happy that our leaders have taken the initiative to invite international leaders and organizations to join us in cleaning up Mathare,” said Patrick, a Mathare resident. “We feel privileged and challenged at the same time because we need to do more. It will be shameful if these leaders visit again and find that we stopped cleaning the day they left.”

UN-Habitat’s Executive Director urged Mathare’s residents to say no to littering. “Let us not waste today’s achievement in cleaning the neighbourhood,” she said. “We should use this opportunity to start reducing waste, organizing designated waste collection points in  neighbourhoods and planting trees for our children.”

Before the clean up began, the Executive Director and diplomats planted trees outside a local school.

The UN-Habitat team also visited the Mathare Environmental One Stop Youth Centre which is led by Isaac Muasa, the 2018 UN-Habitat scroll of Honor award winner and presented the Centre with a plastic shredding machine.

After the clean up, the Governor of  Nairobi, Mike Mbuvi Sonko, speaking in front of a large crowd, thanked UN-Habitat for its continued support in the monthly clean-ups.

“We are proud of the working relationships that Nairobi County Government has established with individuals, private companies, resident associations, regional and international Organizations especially UN-Habitat who are present today to make the clean-up exercises a success,” he said

H.E. Fernando Coimbra, Brazil’s Permanent Representative to UN-Habitat said he saluted the community of Mathare, their leaders and youth.

“You deserve to be congratulated, be assured of our support to UN-Habitat in improving lives and offering a proper livable environment we are happy to be part of this effort,” he said.