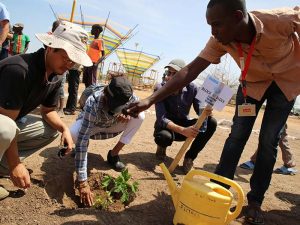 A child enjoys the playground at Kalobeyei Integrated Settlement in Turkana, northern Kenya, designed by refugees and the host community UNHabitat/2018/Ivy Mutisya

Kalobeyei, Turkana, Kenya, December 2018 – A year ago, refugees living in the Kalobeyei Integrated Settlement and local residents joined forces to design public spaces in a project designed to reduce tension in the area.

The Kalobeyei Integrated Settlement was set up three years ago to cope with the continuing influx of refugees from Sudan and other regional countries into northern Kenya. The site, comprising of three villages, is 40 kilometres north-west of the refugee camp at Kakuma and close to Kalobeyei “old town” where the host community mostly live.

The project aims to bring the host community and refugees in the three villages in Kalobeyei Settlement closer together using public spaces and a public transport hub.

A delegation from the Block by Block Foundation plants a tree near a playground designed by refugees and host community in Turkana, northern Kenya UNHabitat/2018/Ivy Mutisya

The project was carried out using the popular computer game Minecraft and aimed to transform four different public spaces; three in the new refugee settlement and one in the host community.

During the first round of the Minecraft workshop over 30 people worked for a week to redesign and improve two public spaces. A third of those who took part had never used a computer but were able to reimagine their neighbourhood using Minecraft. During the second round, over 40 refugees from seven different countries sat together to design two more public spaces.

The rehabilitation of the public spaces is funded by the Block by Block Foundation and recently a delegation from the Foundation visited Village I, where they saw children from the refugee and host community playing together in the playground.

As part of the public space amenities and facilities; Solar lights were installed in the public spaces by workshop participants and women and youth groups planted more than 500 trees improving the micro-climate of the area.

One of the four public spaces and transport hub was implemented in 2018 and the other three will begin in 2019. Several refugees from Village ll and lll and local residents will be trained in solar light installation, public space upgrading and public space management in the coming year.

“UN-Habitat supports the engagement of communities in revitalizing their spaces giving both refugees and host communities new skills,” said Pontus Westerberg of UN-Habitat.  “Minecraft helps to make this a participatory process and gives residents room to visualize the potential of public space within their neighbourhoods.”