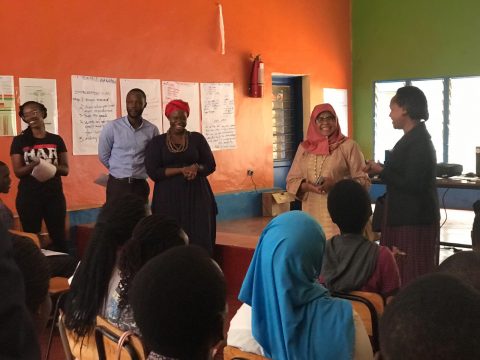 February 2019 – The UN-Habitat Executive Director has praised the One Stop Youth Resource Centres, spaces created by UN-Habitat, local government and youth during a busy month for the Centres.

The first One Stop was opened on International Youth Day, August 12, 2002, in Nairobi, Kenya and was quickly followed by Centres in Kampala, Dar es Salaam and Kigali. Recently, Centres have opened in post-conflict cities such as Mogadishu and Juba, and in counties in Kenya and districts in Rwanda. Over half a million young people have benefitted from services at the eight One Stop Centres in East Africa.

“The One Stop Centre is a great platform for youth to come together, learn new skills, and interact,” said Ms. Sharif. “By attending workshops and trainings, youth develop professional and technical skills – interview preparation, tailoring and other expertise which they can use to get access to job opportunities and improve their quality of life.”

Shortly after her visit, UN-Habitat facilitated the visit of Loeb Foundation fellows, based out of the Harvard Graduate School of Design, to the Kimisigara One Stop.

“I was blown away with the breadth of their programs, partnerships and impact,” said Ms. Andrea Reimer, current Loeb Fellow and former City Councilor for Vancouver, Canada. “Nearly three quarters of Rwandans are under 25 and the Youth Centres are at the front lines of delivering support for economic, social and cultural progress for them. They also play a critical role in innovation, post genocide dialogue, health promotion and youth involvement in policy making.”

Meanwhile the Mathare Environmental One Stop Centre, situated in the Mlango Kubwa informal settlement in Nairobi, which opened in 2018, launched its Upcycling Centre, in the presence of the UN-Habitat Executive Director,  the Ambassadors of Norway and Brazil and the Governor of Nairobi.

Upcycling is the process of transforming waste into new products of better quality or for better nvironmental value as opposed to downcycling which converts materials and products into new materials of lesser quality.

“Working with the UN-Habitat Executive Director and her team we have been able to upgrade our garbage collection activities to an Upcycling Centre,” stated Isaac Muasa, youth coordinator and winner of the UN-Habitat Scroll of Honour for 2019. “Through Upcycling we will make more money from the garbage we collect, which improves the lives of the young people in our community.”Each week, Mathare Environmental collects rubbish from 2000 households in Mlango Kubwa; which includes approximately 100 kg of recyclable plastics which are then ground for upcycling.

On 21 February, the Centre hosted Ms. Dagmar Timmer, from One Earth, a non-profit research and action group catalyzing action on sustainable consumption and production issues. She emphasized that the work being done in Mathare is part of a global movement to advance a “circular economy,” where waste is transformed into a resource and not just dumped.

“Bringing ‘thrown-away’ resources like plastic bottles back into use by separating them out, adding value and finding the market is both smart and necessary,” stated Ms. Timmer. “In the years

Young people being given training in lifeskills at the Mandera One Stop Centre, north east Kenya UNHabitat/2019

ahead, it will be exciting to see what other opportunities you find.”

There was also a training session at the Mandera One Stop in Mandera County in north east Kenya on 12 February. The County has been subject to attacks which have hit the economy and shut down many jobs such as quarrying and the Country Government is partnering with UN-Habitat and the NGO Accept International.

”We welcome other partners to join us in this amazing journey to improve the lives of young people with the opportunities to learn and play a key role in participating in the development agenda of Mandera County,” said Mr Shamsa Mohamed Haji, Mandera County Executive, Gender, Youth, and Social Service.

Working with the County, UN-Habitat trained 35 young men and women in peace and conflict training, and lifeskills and will be donating two brick making machines and 10 computers to further the training.

New One Stops are being launched at an increasing rate with a new One Stop Centre just  opened in Wau, South Sudan and others planned in Vihiga, and Nyeri counties in Kenya.