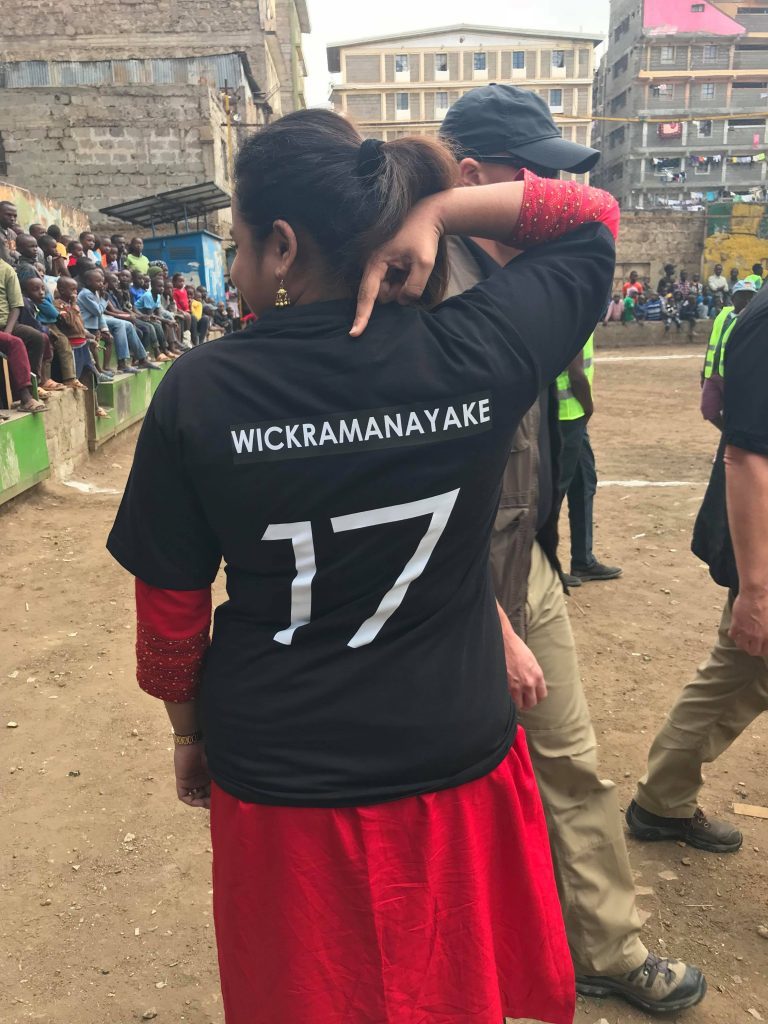 Hosted by Dr. Aisa Kacyira, Deputy Executive Director of the United Nations Human Settlement Programme UN-Habitat, the day started with a visit to the community-based organization, the Mathare Environmental Conservation One Stop Youth Centre (One Stop). The One Stop serves as community hub offering services such such as food distribution, information and communications technology access, and vocational and entrepreneurship training.

“We founded this Centre with support and assistance from UN-Habitat and the Government of Norway. Today, we serve meals to more than 300 homeless people in the neighbourhood every weekend out of our community kitchen, provide training in our Innovate Kenya technology Centre, and a safe space for young people to gather and plan for their own and the future of their community.” said Isaac Mutisya Muasa, known locally as Kaka.

Kaka is a resident and a community leader in Mathare. His nickname means “brother” in Swahili—earned through the role he plays to many people in his community. Kaka’s efforts have been crucial to the developing safe and generative public spaces for youth in Mlango Kubwa. Isaac is currently the One Stop’s chairman.

Harnessing the potential of young migrants

After the tour of the One Stop, Minister Hussen, the Youth Envoy, the High Commissioner and UN-Habitat Deputy Executive Director played a friendly soccer match against One Stop girls’ team. “The One Stop and soccer pitch have had a significant impact on the community both in terms in safety and in creating opportunities for young people,” stated Dr. Kacyira.

Shortly after the visit to Mathare, they reconvened at the United Nations compound for a town hall discussion with UN-Habitat staff and NGOs working in Africa to harness the potential of young migrants and refugees.

“We need to change the negative narratives associated with migration and refugees, and focus on the positive contributions they make,” said Minister Hussen. “Refugees and migrants are not monolithic. Some refugees migrate with resources, while others are more vulnerable. They tend to move into the margins of the cities they move into and become vulnerable to violence, unemployment and exploitation. They often have no documentation.”

Dr. Kacyira underscored the important connection between migration and urban development. “People who are displaced as a result of civil war, conflict, climate change and political unrest are increasingly seeking refuge in urban areas. Half of the world’s 38 million internally displaced persons (IDPs) and more than half of the world’s 19.5 million refugees live in towns and cities. This poses a unique challenge for cities.

It also offers an opportunity to work differently and to ensure that crisis response provides immediate humanitarian relief, while also strengthening urban resilience.” Dr. Kacyira highlighted UN-Habitat’s work in the area of migration with a particular focus on housing and access to services for refugees in Kakuma, Northern Kenya, Dr. Aisa also discussed UN-Habitat’s close cooperation with UNHCR and innovative work in Kalobeyei on planning for durable solutions in close cooperation with refugee host countries like Kenya.

Envoy on Youth Ms. Wickramanayake closed the proceedings focusing on the resilience of the youth, personified by those she met in Mathare. “I was inspired by the work of the young men and women at the Mathare One Stop. They represent the strength and resilience that young people, especially young women, demonstrate in the face of social and economic adversity. We see this strength in those young people who are migrants and refugees, who face exploitation, lack of access to education, and other hardships. They have rights that must be recognized and celebrated.”