UN-Habitat Commits To Localizing The Youth Peace And Security Agenda 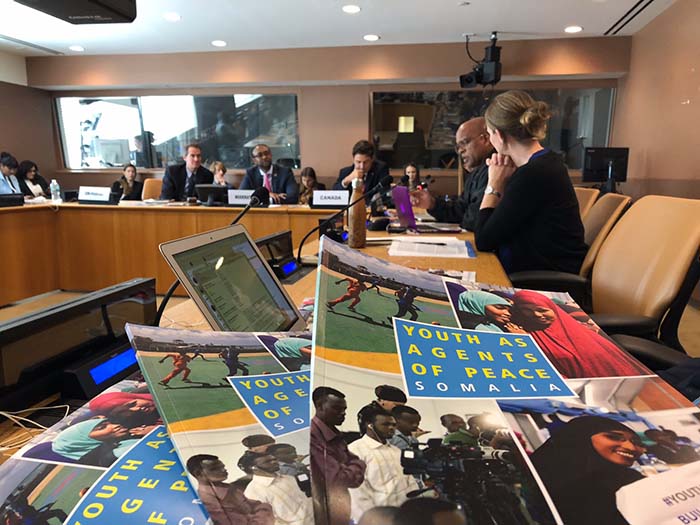 NEW YORK, USA, October 2018 – Across the globe, one in four youths is affected by armed conflict or organized violence. Many more are stereotyped as perpetrators and at-risk individuals. Yet, if given the opportunity, youth can be key partners in building peace.

This was a key message at the side event co-hosted by UN-Habitat and the Government of Canada in early October. In what was a significant 73rd United Nations General Assembly for youth worldwide, the side event explored how to involve young people in peacebuilding on a local level.

The event’s roundtable reflected on learnings from the first joint participatory study between the World Bank, UN-Habitat and UN Somalia titled Youth as Agents of Peace: Somalia. The Study highlights how Somali youths can foster peace and prevent conflict – a subject which has rarely been analyzed before.

Somalia faces a range of challenges as the country emerges from civil. More than half the population – 70% of which is under the age of 30. Youth unemployment stands at 75% and is thought to expose young Somalis to illegal migration, organized crime and violent extremism.

“Unemployment is a major problem, but underneath that is hopelessness and a belief that there is no fairness,” says a young Somali woman who participated in the study. “Young people get angry and frustrated.”

Forty-seven young women and men from Afgoye and Mogadishu participated in the study. Their views helped set out recommendations and a framework for engaging youth in peacebuilding.

The study contributes to The Missing Peace: Independent Progress Study on Youth, Peace and Security, which was launched just a few days before the side event. This publication was mandated by the UN Security Council Resolution 2250 on Youth, Peace and Security, which urges Member States to involve youth in the peace process and dispute resolution.

“As we embark on this important work to localize the Youth, Peace and Security Agenda, we need to think much more clearly about the impact of our work, specifically at a national and local level,” notes Sharmaarke Abdullahi, Pogramme Management Officer, UN-Habitat.

The side event used Youth as Agents of Peace: Somalia as a case study for translating the principles of Resolution 2250 into practice. Participants (including youth, civil society and non-government organizations, UN-Habitat and Public Safety Canada) highlighted the

importance of localizing the youth peace and security agenda, addressing the root causes of conflict, as well as measuring progress through data and frameworks. They also emphasized the need to include youth in decision making, and to continue demonstrating the link between youth engagement, conflict prevention and peace building.

“We must learn how to support the agenda from a technical perspective, and measure how it contributes to building safe communities and engaging youth as the main actors,” says Lucie Léonard, Research & Knowledge Manager, Public Safety Canada.

“UN-Habitat has recently launched the Mogadishu One Stop Youth Centre. The Youth Centre will serve as a safe space for youth and promote opportunities for decent employment, promote peace and impart important life skills to the youth in Mogadishu,” adds Doudou Mbye, Officer in Charge, Somalia Programme, UN-Habitat.

Speaking at the event, Ilwad Elman, Director of Programs & Development, Elman Peace Human Rights Centre, spoke about the need to invest in skills building for youth and evidence-based programming. “For peace and security to be achieved, young people must have hope, opportunities and access to evidence-based programmes and services. However, youth should not be seen as mere recipients of these services, nor stereotyped as perpetrators and victims. Most young people are not engaged in violence, but rather are agents of peace in their own countries.”

The discussion also highlighted peace building examples from Latin America and the Middle East underscoring the importance of a comprehensive approach to peacebuilding and sustaining peace, particularly through the prevention of conflict and addressing its root causes at all stages of conflict, and further reinforce momentum in the implementation of the Youth, Peace and Security agenda at the local level.