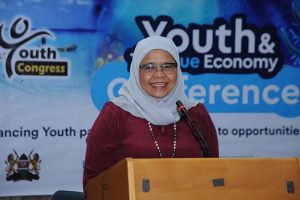 In her keynote speech delivered at the Governors and Mayors Convention, Ms. Sharif praised the creative and action-oriented recommendations in the document adopted by 300 youth participants at the Youth and Blue Economy Conference held on 23 November at the United Nations Complex, Nairobi as a precursor to the main Conference.

Can we say that and mention attended by hundreds of  governors, mayors and local govts of water facing cities and towns

Emphasizing the need to adopt holistic and integrated sustainable development plans at all levels, she noted that: “Climate change is real and is one of the key factors that cities must take into consideration, and the question of managing the rise in sea levels must be addressed by municipal authorities and governors.”

The Executive Director reminded the hundreds of governors, mayors and local government representatives of the theme of World Habitat Day 2018 Municipal Solid Waste Management, drawing a direct link between waste management and the blue economy.

She announced that UN-Habitat and the County Government of Nairobi would partner in a clean-up exercise involving community groups and schools in the Mathare slum on 1 December 2018, saying the initiative would encourage regular community clean-ups, community sensitization and awareness raising.

“We must encourage residents not to generate waste at all where possible, or to reducing and recycle it. But I want to add the first R – Rethink. We need to rethink our consumption habits by constantly asking ourselves whether we need everything we consume. This will reduce the amount of waste we generate and encourage us to strive towards zero wastage,” said Ms. Sharif.

Inviting participants to visit the UN-Habitat booth at the exhibition, she mentioned that the agency’s work in promoting sustainable blue economies in cities is highlighted in the newly published UN-Habitat Blue Economy and Cities background paper.

Reiterating UN-Habitat’s commitment to fully support the Government of Kenya towards achieving the Big4 Agenda, Ms. Sharif said a task force had been set up to explore areas of collaboration in housing, food security, health and manufacturing.

“If we get our cities right through holistic and sustainable development plans that fully integrate coastal and fresh water bodies, the potential to transform marine resources into prosperous development is infinite. There are a lot of opportunities if we make our cities right,” she said.

Ms. Sharif said the large number of mayors and local authority representatives at the meeting demonstrated the important role of local and sub-national governments in making their cities and city regions more sustainable.

“I am proud to be part of this momentum and hope that we can create a long-lasting impact together,” she concluded.