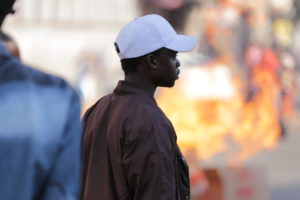 For young people in Zimbabwe and elsewhere in the region shock, disbelief, anguish, pain, panic and anger characterized the emotions as the news of Zororo Makamba started trickling through social media.

Zororo was only 30 and unbeknown to people he had an underlying health condition that made him succumb to the Corona Virus.

Looking at his age and by his image and popularity, most people thought he would ride the wave and survive just like how it has been framed that many young people across the globe were at a lower risk. However, it was not to be so for the young prolific entrepreneur who became the first victim to the virus in Zimbabwe.

With his underlying health condition, an unprepared health delivery system and a seemingly unconcerned government a young life was lost as well as the myth of invincibility in Africa because of its young population.

As the coronavirus wreaked havoc in Asia, Europe and the rest of the world Africa remained unscathed leading to several epidemiological inquiries as to why that is so. What was clear from the data coming from China was that it seemed young people had higher chances of survival and it was predominantly the older generation who were most at risk and those with preexisting medical conditions. From this data, inferences could be made that Africa was more likely to ride the wave and not experience mortalities such as those in other continents and the nations therein. The inevitable finally happened and Africa was hit by its first victims, with data showing that of those infected the average age of cases is 44.9 (Africa CDC). The WHO Director General issued a chilling warning.

“Today I have a message for young people: you are not invincible; the virus could put you in hospital for weeks or even kill you. Even if you don’t get sick the choices you make about where you go could be the difference between life and death for someone else”

If we follow Zororo’s last days on earth, we can pick some key lessons that can help young people define their role during this pandemic. The Daily News in Zimbabwe reported that Zororo visited New York city and when he returned, he visited his private doctor because he was not feeling well, he had a slight flue. Zororo did not self-isolate he then visited different places, a bank, social pub (popular to young people), a friend’s house. When he succumbed to the full wrath of the coronavirus, the hospital was not prepared to offer the assistance that he needed because it was ill equipped due to years of negligence by the government in supporting the public health system. We cannot say with certainty that he would have survived if the facility was well equipped, but we can say with absolute authority that it would have improved his chances of survival.

Zororo’s story helps us to piece together the dilemma that young people in Africa face considering the pandemic. Both from the structural challenges of the African continent and the way of life of young people.

1. Young people are the most mobile population. Statistics show that 60 to 70 percent of all migrants are aged between 15 and 34 years. Young people are the most dynamic part of the population and are more prone to move in search of new employment opportunities and better livelihood (FAO 2017). This increases their risk of infection in addition the risk of infecting the most vulnerable sector of the population which is the elderly.
2. We are told that the coronavirus is more fatal to people with underlying health conditions e.g diabetes, heart problems; seventy percent of People living with HIV are in Sub-Saharan Africa and we know that HIV prevalence among young people is high in Africa. Of the 15% young women living with HIV aged between 15-24 years, 80% of are in Sub Saharan Africa. These statistics alone put young people at varying risk of mortality due to the coronavirus coupled with their low health seeking behavior.
3. Whilst there are limited statistics young people are more prone to nightlife and other social gatherings. There are growing reports on how young people all over the globe have been defying the restrictions on social gatherings just so that they could go to the beach, the bar or any other social gathering. It is understandable because they are full of life, they are full of energy, they are restless and easily get bored. However, this behavior alone increases the rate of infection and endangers many people.
4. With high unemployment in Africa most young people form the bulk of the informal sector. They are your bus conductors, vendors, street park attendees, ‘boda bodas’, you see them mingling in town hustling so that they make it.

Asking them to stay at home will only agitate them because they believe they are unemployed graduates forced to be on the streets because their governments are inept, selfish and have not invested in the future of the young people. So, they will not practice social distancing because it is impractical to their lived realities.

1. Use their tech survy to spread correct and accurate information. There is a lot of misinformation about the coronavirus especially to the disadvantaged youth. This is the time to use their creativity to spread messages that keep people safe and that give people hope
2. Endure staying at home with your families. If more young people who are most of the night lifers heed this call, then the impact will be significant. You have a social and moral responsibility to protect yourself and others. Whilst at home they can ensure that they are engaging in productive work of assisting childcare, assisting with house chores because the burden of unpaid care work will be huge for women and girls
3. Identify a cause they can participate in, for example find the most vulnerable people in their community that will need assistance. Are there people living with disability? Are there elderly people? Identify the best way to support them through this difficult time whilst practicing highest standards of preventative behaviors
4. Talk to someone. Sometimes being quarantined and social distancing can result in some people feeling depressed and disconnected. So, pick up a phone and talk to someone and by so doing we help each other cope with mental health issues that have also gone up with this pandemic

Young people will be the heroes of this story, they are our Achilles. However, in order to protect Achilles heel, governments of Africa must recognize that youth are a strategic ally. They must create a conducive environment and make necessary investment that enables the youth to cultivate challenge driven leadership. Through this form of leadership youth can solve the wicked problems brought by the coronavirus.

Zororo was brilliant and he had so much to offer. Many promising young African lives will die unnecessarily if the governments do not invest in health infrastructure, address the inept governance architecture and demonstrate ethical leadership.