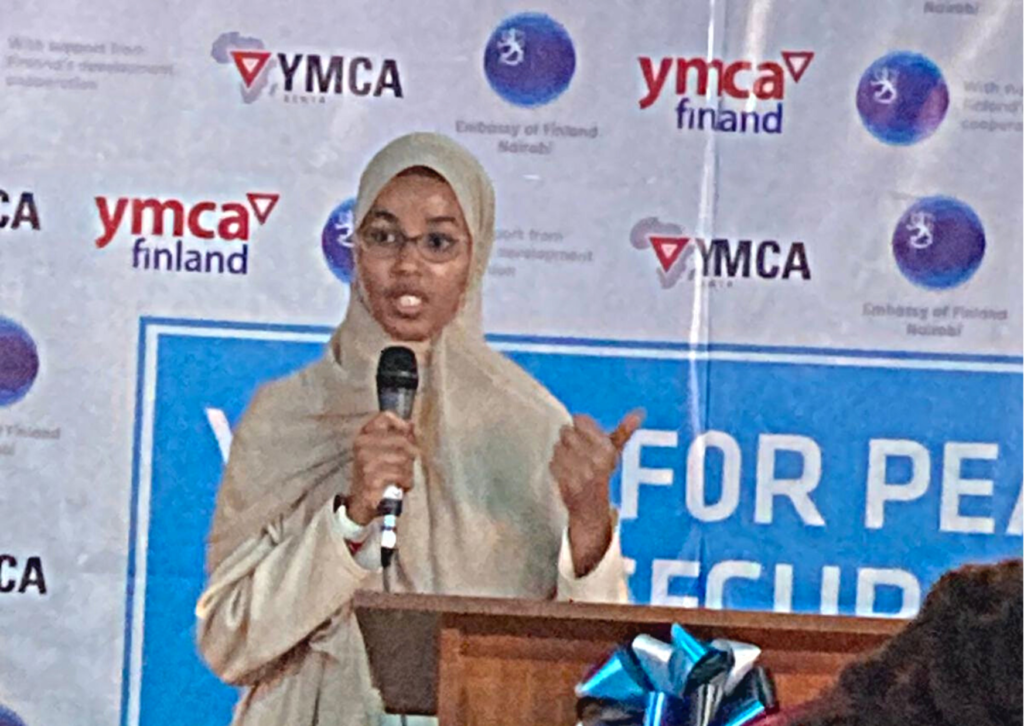 4 November 2022, Nairobi. – On 9th December 2015, the United Nations Security Council established Resolution 2250 (UNSCR 2250) that recognized the positive role young people play in maintenance and promotion of peace and security. There was a need to enhance meaningful participation of youth in peace and security matters. This called for all member states to enhance the implementation of the resolution under the 4 pillars of youth participation, prevention, protection, partnerships and disengagement and reintegration.

Youth have been the most affected in conflict zone areas. Lack of favorable policies, action plans and engagement in decision making processes, have limited the voices of youth from being heard. This has consequently led to the youth being vulnerable to recruitment and radicalization to terrorist groups and political incitements instigating violence and conflict.

It was a result of this gap that in 2018 Finland’s Ministry of Foreign Affairs announced the establishment of UNSCR 2250 National Action Plan (NAP) and launched it nationally in 2021. Finland’s National Action Plan was achieved through the establishment of the 2250 Network, in 2016, to support the national implementation of UNSCR 2250. In 2018 and 2019, wide national consultations of the draft UNSCR 2250 NAP were facilitated to provide the youth perspective.

After the consultations, Finland held its first International Symposium on Youth Participation in Peace Processes, in Helsinki, 2019, and integrated NAP into their government’s programme. In 2020, the 2250 coordination group was created that facilitated workshops, consultations and planning of the draft NAP. Further consultations were done, in 2021, of the draft NAP and indicator working groups facilitated. It was later that year that Finland’s UNSCR 2250 NAP was nationally launched. With the achievement of the establishment of the National Action Plan, Finland aims to support the implementation of the UNSCR 2250, globally, in the next two years from 2022 to 2024.

As the world celebrated the World Cities Day on 31st October 2022, YMCA-Finland (Young Men Christian Association) in partnership with the Embassy of Finland and YMCA-Kenya organized the UNSCR 2250 Networking event in Nairobi, Kenya. The event brought together stakeholders’ representatives from community-based organizations (CBOS), non-governmental organizations (NGOs), universities, Kenya National Youth Council, Government, International Organizations and UN Agencies. The event introduced UNSCR 2250 to the stakeholders and demonstrated how a National Action Plan can be attained in Kenya by sharing the case studies from Finland. The question posed to all stakeholders was “What are the next steps to be taken in the 2250 process and who should be taking the steps? Is it the CSO-level or local level or national level or international level?”

“During my 6-year work in the CBO, we were very active on Twitter covering the topic of youth, peace and security. This led to our invitation at an UN High-Level meeting and that’s when I understood that the work we did was aligned to Youth, Peace, and Security. This shows that a lot of youth are doing a lot of work out there without knowing the work they are doing is aligned to SDGs or UNSCR 2250. There is need to advocate for UNSCR 2250 at the grassroot level of the counties and work up to the national and international levels”.  – Umulkher Harun (Umi), Member of Parliament, Kenya National Assembly

PrevPreviousWorld Habitat Day Celebrates Diversity and Accessibility: Leaving No One And No Space Behind
NextClimate Changemaker Leah Namugerwa Speaking at the Opening of COP 27Next