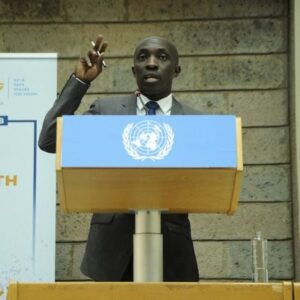 Raphael Obonyo is a youth advocate at the national, regional and international levels. Mr Obonyo is the external adviser, UN Habitat’s Youth Advisory Board, and Africa’s representative in the World Bank’s Global Coordination Board on Youth and Anti-Corruption. He is the co-founder and a member of the Advisory council of the Youth Congress, a premier youth-led organization in Kenya. He has extensive knowledge and experience in public policy, international development, political economy, governance and human rights. In 2013, the Global Diplomatic Forum named Mr. Obonyo as one of the Global Young Diplomats. He is 2014 Crans Montana’s New Leader of Tomorrow. In 2015, Raphael was named as one of Africa’s most inspirational youth by the Africa Youth Hub. In 2016, he was named as the Best Communicator in Kenya and the UN Persons of the Year. In 2018, his name made an entry of Most Influential Young Kenyans. In 2019, he received the Africa Voice Achievers Award. He holds a Masters in Public Policy from Duke University. He is a Ford Foundation Fellow.