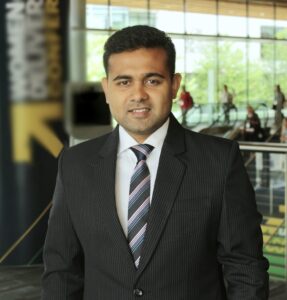 SM Shaikat leads SERAC-Bangladesh, a youth focused organization advocating and implementing programs on access to health rights, democratic participation of youth, friendly services, and gender-based violence prevention in Bangladesh. He was the Bangladesh country moderator to the 11th International Dialogue on Population and Development in Berlin.

Shaikat has worked with a number of global youth agencies, including the Bangladesh Country Coordinator for International Youth Alliance for Family Planning and an Ambassador for Young Men for Gender Equality. He was elected to the UN-Habitat Youth Advisory Board in 2015 and has been a speaker at several events during the 69th, 70th, and 72th UN General Assemblies in 2014, 2015 and 2017, and at 62nd Commission on the Status of Women in 2018, opening plenary speaker of the 9th World Urban Forum in Malaysia. Shaikat is the founder of the Bangladesh Urban Youth Councils Network that is initiating youth councils in city corporations across the country to increase to access to civic participation of young people, and he also founded the Bangladesh National Youth Conference on Family Planning in 2016. He was the founding Chair of the Reproductive Health Supplies Coalition youth caucus, a member of the PMNCH Partners Forum Global Organizing Committee, member of the 9th and 11th World Urban Forum Advisory Group, international steering committee member of International Conference on Family Planning 2022, and many other regional and international networks.

Shaikat was nominated by the U.S. Department of State to the International Visitors Leadership Program in 2013, and Asia Young Leader for Democracy in 2015. He has been named as a Bayer Scholar and awarded the 120Under40 Championship by the Bill and Melinda Gates institute at the Johns Hopkins University.