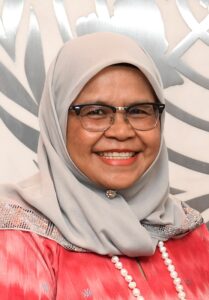 Ms. Maimunah Mohd Sharif, a national of Malaysia, was appointed executive director of UN-Habitat at the level of Under-Secretary-General by the United Nations Secretary-General following election by the United Nations General Assembly on 22 December 2017. Ms. Sharif assumed her post at UN-Habitat’s Headquarters in Nairobi, Kenya on 22 January 2018.

Prior to this appointment, Ms. Sharif was the mayor of the city council of Penang Island, Malaysia. In 2011 she became the first woman to be appointed president of the municipal council of Seberang Perai. As mayor, she led the municipal council of Seberang Perai to achieve its vision of a ‘cleaner, greener, safer and healthier place to work, live, invest and play.’ She is a champion of Gender-Responsive Participatory Budgeting and Planning, integrating gender perspectives into the governance process.