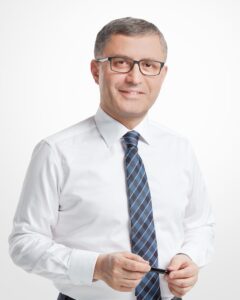 Mayor Türkmen was born in 1973 in Şalpazarı. He is married, and has two daughters and two sons, and three grandchildren. He studied at the Istanbul University Faculty of Law, and began his career as an attorney in 1996, but his political life began well before that in 1992 with active participation in the Youth Branch of the Refah Party (Welfare Party), and has since been a part of the Fazilet Party (Virtue Party) and a founding member of the AK Party (Justice and Development Party). Between 2004-2014, he served as Assistant Mayor of the Üsküdar Municipality and Member of the Greater Istanbul Municipality’s City Council.

He was elected Üsküdar Mayor in the 30 March 2014 local elections. As Mayor has initiated several new projects focused on urban planning & public space, health and wellbeing and education. Under his leadership the Üsküdar Municipal Headquarters Building, which is the first LEED Gold-Certified public building in Turkey, was completed. He has also overseen the establishment of five new public squares, 9 sports centers, 15 swimming pools, the Nakkaştepe Park, and the Nevmekan and Nevmekan Sahil, the Üsküdar Science Center and Planetarium, Turkey’s most comprehensive Barrier Free Living Center, 33 neighborhood Family Health Centers, 10 new schools were built and the building from scratch or the restoration of a total of 62 mosques.

Türkmen, who is also a hafiz (a memorizer of the Quran), also has three grandchildren.